Detox From Adderall in Florida

If you or someone you love has an Adderall problem, you are likely wondering where you should go for help and support. Adderall addiction impacts your life in more ways than one. You don’t want to face the problem alone. The good news, however, is that Chapel Hill Detox can lend a helping hand. Learn about detox from Adderall, how addiction affects your life and how we can help. Taking the right steps is a powerful way to make addiction a thing of the past. You will know you are moving in the right direction when you see the results for yourself.

What is Adderall, and What is it Used For?

Adderall is a prescription stimulant mainly used to treat narcolepsy and attention deficit disorder (ADD). It works by increasing the effectiveness of neurotransmitters in the brain. Those who have trouble concentrating or controlling impulsive behavior can take Adderall to improve their symptoms. If you take Adderall, ensure you follow your doctor’s instructions and take it as prescribed so that you don’t encounter problems along the way.

When you take it properly, Adderall can increase your performance at work, school and other areas of your life. Focus is one of the main factors in success. If you can’t focus on one thing for too long, it harms your ability to achieve your goals. On the other hand, the ability to concentrate allows you to achieve success much sooner than you otherwise would have. Adderall plays a vital role in the lives of those who are unable to focus on their own, and it improves their quality of life in many ways.

How Does Adderall Work?

Learning how Adderall works is a critical step if you want to know how to detox from it. Adderall impacts the way your brain processes certain chemicals. People with attention-deficit hyperactivity disorder (ADHD) have decreased activity in the frontal cortex. This decreased activity makes it all but impossible to focus on the same thing for more than a few short minutes. When you take Adderall, it stimulates the frontal cortex and makes it much easier to focus. Many people find that taking Adderall the right way is a life-changing experience.

People who have trouble focusing at school or work notice a big difference. A lot of people with ADHD don’t even know they have it, and they don’t think they can do much about their lack of focus. Most of them notice major improvements in their performance when taking this medication properly.

Why Do People Abuse Adderall? People abuse Adderall for different reasons. First, they use it to increase their performance at work or school even when they don’t need it. The other reason is that Adderall activates the reward center of the brain if you take it too often. In other words, they take Adderall to feel euphoria and pleasure. You must take more than a safe dose to experience those effects. People who abuse Adderall take more than double the prescribed dose to reach their goals. Those who take Adderall to perform well at work or school without a prescription also put themselves at risk for other health problems.

Your doctor considers your current health and background when prescribing medication. Many medications can interfere with Adderall and create a harmful or deadly reaction. Your doctor has to make sure it’s safe for you to use Adderall before you begin taking it.

How Addiction Impacts Your Life

Drug addiction impacts you in many ways, and it’s vital you get the situation under control as soon as possible. Most people don’t notice they have a problem until it’s too late. When you are addicted to Adderall, you can experience heart problems, numb fingers and toes, and more. More serious problems include hallucinations, aggressive behavior, and heart attacks. If you are addicted to Adderall, functioning without it becomes difficult.

You won’t be able to think clearly. You could also have trouble staying awake if you don’t know how to solve the problem. If you use it illegally, it costs much more. You could go into debt paying for your habit, and you could even lose your job. Addiction harms your relationships and friendships. If you are not careful, addiction hurts all areas of your life.

Learn to spot the signs of withdrawal so that you know what to expect before they happen to you. The severity of your withdrawal symptoms depends on how long you have used Adderall and how much you took each day. In most cases, you will find it even harder to focus than before. You could have trouble sleeping and notice you feel out of it for a while. Many people also feel as though they are talking, thinking, and behaving in a different way.

Other symptoms of Adderall withdrawal include:

In extreme cases, the withdrawal symptoms are so severe that they prevent you from living your life. You could run into trouble at work or in other areas of your life, and maintaining your daily responsibilities becomes a challenge. In simple terms, withdrawal symptoms make your life that much more difficult. Some people lose their jobs or get failing grades at school. These consequences can have a lasting impact if you don’t do something to prevent them, so don’t overlook this problem. Getting proper treatment for Adderall withdrawal makes all the difference in the world.

For example, you could experience major depression during your withdrawal stage. Depression also impacts your performance at work and school, and it affects your relationships. Getting past your withdrawal symptoms as quickly as possible is the smart move.

Here’s a breakdown of the Adderall withdrawal timeline:

The first withdrawal symptoms can show up within the first couple of hours after you last took Adderall. These symptoms usually include fatigue and intense depression.

During the first week, symptoms tend to worsen, and this is considered the peak of withdrawal. Users might experience intense fatigue, depression and irritability, as well as nightmares and headaches.

After Day 5, withdrawal symptoms start to fade. Users might still feel moody and unable to function normally in social settings, but they’ll start feeling better. Mild depression might still linger, but it’s less severe than before.

Some users feel the effects of Adderall withdrawal a few weeks after their last dose. This is more likely to happen to users with a high tolerance who have been using Adderall for more than a year.

Detox from Adderall: How Does it Work? Adderall detox is the process of getting the drug out of your body. Even when you quit experiencing the effects of the medication, Adderall remains in your system. Detoxing means getting all of it out of you so that you can recover. Detoxing becomes harder and harder if you have used or abused Adderall for much longer. Some people choose to quit all at once, but that path is not always the best.

Trying to quit all at once is much harder and increases your odds of relapse. Instead of doing it the hard way, try reducing your dose over time so that you keep your withdrawal symptoms under control. Speak with your doctor before you quit if you want to increase your odds of success.

Your doctor will let you know what path makes the most sense for you, and this step makes your life much easier. Detoxing might seem like a daunting task beset with many roadblocks. The good news, though, is that you can do it with the right plan and a little support. With enough dedication and guidance, anyone can detox from Adderall and get their life back on track in no time. 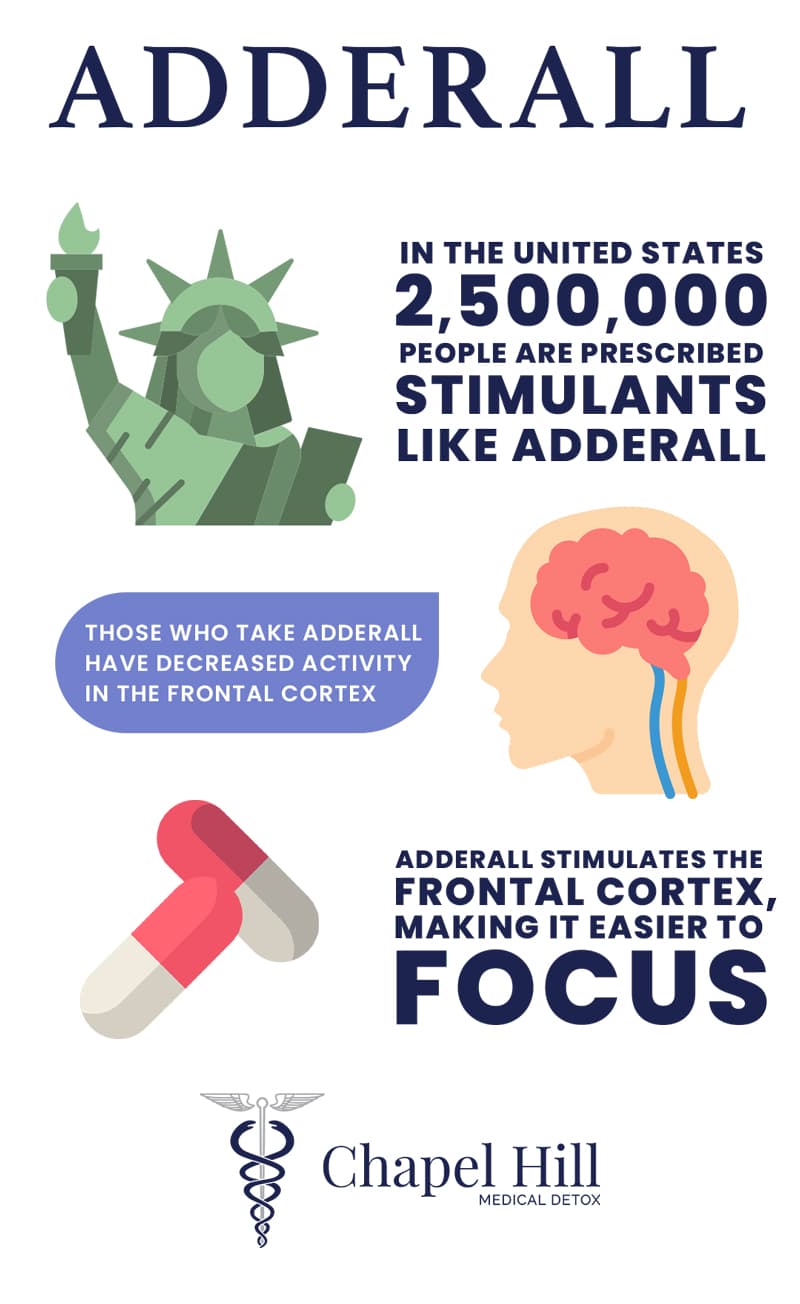 No matter who you are, overcoming substance abuse is hard. You want to make it as easy as possible to get the problem under control. At Chapel Hill Detox, our team cares about you and your needs. We take the time to learn about you and your unique situation. We don’t just treat you like a number. The first thing you will notice is our upscale and high-quality environment. You get great food and live in a comfortable and welcoming environment. Our goal is to make you feel like you are right at home when you stay with us, and we are confident you will know you came to the right place.

You will also notice we have compassionate staff. You are much more than just another patient. Our team learns about your situation and connects with you on a personal level, and you will know we care when you see us in action. Connecting with our staff on a personal leve
l makes your detox and recovery easier than ever before.

Some treatment centers discourage you from interacting with your family while you are getting treatment. On the other hand, we invite your family to be part of your recovery process. This means you won’t have to spend too much time away from your loved ones while you are with us. We do, however, discourage you from interacting with harmful influences, such as friends and family who have no desire to improve.

Getting Started With Adderall Recovery

Who are you, and what are your unique needs? We do everything we can to make recovery as easy as possible. We provide community support, empowering our patients to learn, improve and recover together. If you would like to get started with Adderall recovery, contact us today.

How Much Does Detox Cost?

Alcohol detox programs range in terms of cost. This will depend on a number of factors, including insurance coverage, the specific program being attended, and location. Most centers work with insurance companies to offer lower prices for those in need of alcohol detox and rehabilitation.

Intrepid Detox Residential works with multiple coverages and it’s likely your coverage is accepted at our facility. For more information regarding cost and insurance, please reach out to one of our staff members.

Here at Intrepid Detox Residential, we’ll lead you on the right path and keep you there every single step of the way. Our team of experienced and dedicated professionals will offer you the guidance and support you need to stay on track. From 24-hour assistance and our medically trained staff, to a calming and relaxing environment that will make you feel comfortable during your stay, we do everything in our power to offer you the highest quality alcohol detox in Florida. For more information, contact us anytime. We are excited to help you on your journey to recovery!