Everyone will experience immense grief or trauma at some point in their lives. It is impossible to sail through life without encountering any storms. However, people deal with grief in different ways. Not everyone will react with post-traumatic stress disorder (PTSD). Usually, the depression goes away. However, the trauma in someone dealing with PTSD will just magnify. If an individual suffering from PTSD consumes drugs or alcohol, it will be magnified even more.

PTSD and drug addiction are two ugly and painful disorders. Anyone suffering from such co-occurring disorders undoubtedly has brought much pain to themselves and their loved ones. Darkness usually envelops such situations and it can be difficult to perceive a solution. However, there is always light in the darkest of nights.

The good news is that PTSD and drug addiction are both mental health disorders. As a result, both of these problems can be treated. The biggest hurdle in defeating such a massive demon is finding the right treatment for the individual. As soon as the correct treatment center is found, an experienced medical staff will outline a course of action.

PTSD is caused by trauma, which is an emotional response to a horrific event. Trauma can happen to anyone, regardless of age, sex, or race. According to the U.S. Department of Veteran Affairs, 7-8% of the U.S. population will experience PTSD sometime in their lives. About 8 million adults have PTSD during a single given year, and 10 out of every 100 women suffer PTSD during their lives. This is compared with 4 out of 100 men.

What Are the Risk Factors of PTSD? 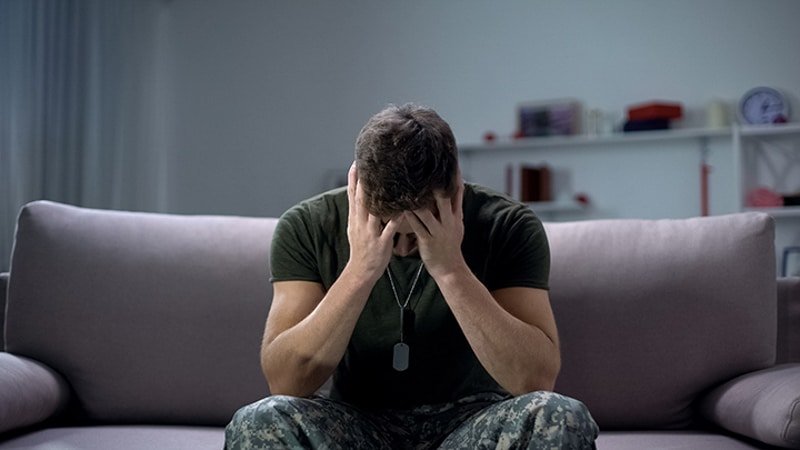 PTSD is not a sign of weakness. Just because one person may suffer PTSD and another may not after experiencing the same tragedy, this is not an indicator of weakness. A litany of factors can contribute to PTSD.

Individuals between the ages of 40 and 60 are more likely to suffer from PTSD. Many reasons can contribute to this fact. People in this age group usually have more responsibility, and as a result, a tragic event will have larger consequences.

The effects of trauma are often intensified by more trauma. Someone who experiences rape, a bad car accident, a natural disaster, or acts of violence will undoubtedly be affected. A new traumatic event will only worsen the effects of the previous trauma.

PTSD can be genetic. If there is a family history of PTSD, depression or other mental problems, an individual is more susceptible to acquiring PTSD.

Substance abuse affects a person’s ability to cope with traumatic events. For example, dopamine is a natural chemical in the body that manages how we feel pleasure. Some drugs, such as cocaine and heroin, achieve intoxication by causing nerve cells to release dopamine. When something traumatic occurs to such an individual, they may not be able to process the trauma naturally.

Coping with a traumatic event is a complicated neural process. Someone may suffer from PTSD simply as a result of poor coping skills. When something traumatic occurs to someone with little control, they may react by blaming themselves, which could turn the grieving process into PTSD.

Of course, the more positive a person is, the less likely they are to react with PTSD. A religious faith and strong confidence are some examples of beliefs that could assist when dealing with tragedy.

Relationships are the greatest source of comfort after tragedy. When someone doesn’t have any family or friends to confide in or reason with, PTSD is more likely to develop. On the other hand, the existence of a social network that may produce guilt or shame can cause someone to develop PTSD.

How to Know Whether Grief is Actually PTSD

Waiting for someone to get over their grief is not the most effective method of determining PTSD. The Fourth Edition of the Diagnostic and Statistical Manual of Mental Disorder lists 17 signs of PTSD. If you or your loved one are exhibiting any of the following signs, treatment should be pursued.

People with PTSD are often confronted with distressing thoughts, images or memories of the tragic event.

People with PTSD are battling disturbing memories in their heads. When they go to sleep, such thoughts are usually the subject of their nightmares. The VA states that 71%-96% of PTSD victims have nightmares.

Avoiding Details of the Tragedy

People with PTSD will actively change their lifestyle to avoid anything that reminds them of that painful event. For example, someone who suffered an accident on an elevator might avoid getting on another elevator. Not until they receive treatment (and they can ride an elevator again) will they be healed.

People with PTSD will unknowingly often block the painful memory of their certain tragedy. Such memory loss is nothing more than a natural defense mechanism. The memory is so painful that the brain will strive to cover it. However, even though someone may not remember it, the painful memory is still present, and is capable of resurfacing at any moment. Therefore, the sooner a PTSD victim gets treatment, the better off they are.

People with PTSD almost always have negative thoughts about themselves as well as their surroundings. Therapy is the most effective way to make someone with PTSD change their perceptions.

People with PTSD are often battling such inner turmoil that they find it difficult, if not impossible, to connect with others. Another explanation for PTSD self-isolation, could be the thought that no one could understand their grief. There are therapists that specialize in dealing with trauma.

People with PTSD are suppressing very painful memories. As a result, they may react with a lot of rage.

People with PTSD will exhibit markedly less enthusiasm and preference for things that once brought them pleasure.

People with PTSD will become more alert. After experiencing such a traumatic event, the body will go to extra measures to ensure nothing like that happens again.

People with PTSD have a lot of things going on in their heads. As a result, it may be difficult to concentrate.

People with PTSD often have trouble sleeping. Hypervigilance assumes that people with PTSD are always on guard. As a result, falling asleep may be very difficult.

People with PTSD can suffer vivid flashbacks. A flashback is a memory so vivid and detailed, it makes the individual feel as if they are going through the tragedy again. Anything – a scent, a vision, a sound – can serve as a trigger to bring on a flashback.

Avoiding Things That Relate to Tragedy

People with PTSD may, subconsciously or unconsciously, choose to avoid things and people that remind them of the accident. Such a defensive mechanism is similar to the previous PTSD sign of blocking out the memory of the tragedy. Both mechanisms keep the individual from dealing with the tragedy. When an individual is in such denial, treatment is the only option.

People with PTSD often assign blame to account for their tragedy. Usually they will assign the most blame to themselves.

People with PTSD find it difficult to create positive feelings.

People with PTSD are very jittery. This sign goes with the previous sign of hypervigilance. Someone who has recently experienced a tragedy, may be very jumpy and on edge.

People with PTSD usually engage in any sort of behavior that could be considered risky such as, drug abuse, unsafe sex, addictive behaviors (like excessive shopping and gambling) and alcohol abuse. Such a lifestyle is incredibly risky, especially for people experiencing PTSD. 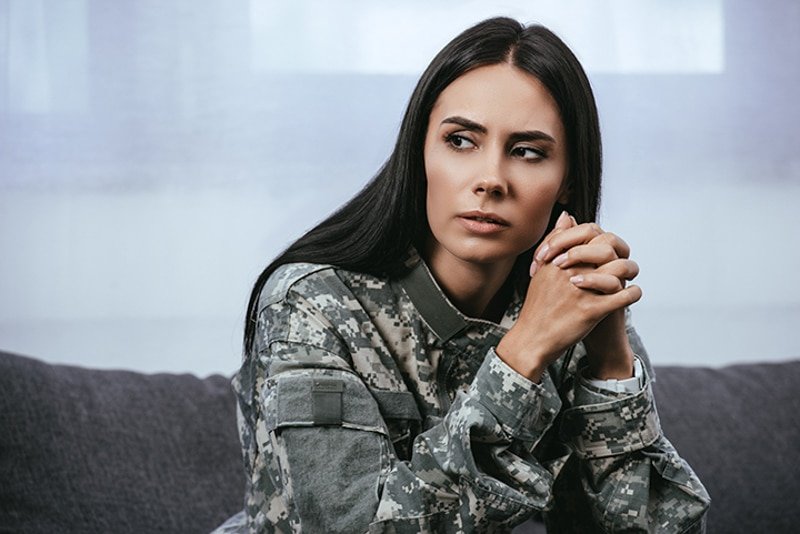 For a PTSD victim, there are dangerous consequences of becoming a substance abuse user. Each disorder feeds into the other, intensifying both of them. In fact, PTSD and substance abuse affect the brain in similar fashions.

When someone experiences a tragedy, the brain produces fewer endorphins, the chemicals in the brain that makes you feel good. After a tragic event, while people are dealing with depression, anxiety and grief, the lack of endorphins may force some to seek relief in alcohol or drugs. Without endorphins, people who just experienced trauma quite often turn to alcohol or drugs to numb the pain for a little while.

Any PTSD victim is suffering from immense grief and depression. Substance abuse offers a temporary relief from this pain. Eventually, PTSD victims will discover that their only escape from this unmitigating pain is abusing drugs. As a result, the addiction that then unfolds is especially brutal and difficult to stop for someone with PTSD.

PTSD and drug addiction is nothing more than a downward spiral. With each disorder fueling the other, an effective treatment for these co-occurring disorders is imperative. A dual diagnosis refers to an individual having two or more mental health disorders. If treatment ignores either one of these disorders, then the individual will never be healed.

There are many forms of effective treatment for trauma. Cognitive behavioral therapy, for example, allows PTSD victims to deal with their painful memories. PTSD victims that are withdrawn and isolated could benefit immensely from group therapy. Physical and mental exercise are more beneficial aspects of rehabilitation therapy.

Finding treatment for someone suffering from trauma and addiction can be difficult. To begin with, the glut of treatment centers makes it difficult to pick just one. In addition, a keen understanding of the various therapies and medicines around and which could benefit you or your loved one most is required while selecting a treatment center. Don’t make these important decisions yourself. Speak to a professional expert at Chapel Hill Detox today. We have been helping people get sober for decades.