Addiction doesn’t discriminate. It doesn’t care about your gender, race, religion, or even your age. While most time and attention is dedicated to addiction among those who are under the age of 60, addiction among seniors has grown rapidly over the years. It continues to do so at alarming rates. In fact, 2.5 million seniors aged 65 and older struggle with some form of drug or alcohol-related addiction in the United States with no end in sight.

Unfortunately, for a variety of reasons, those 65 and older who suffer from addiction tend to get overlooked. It also doesn’t help that as we get older, we tend to find ourselves in need of more and more prescription medications to treat various ailments. This in turn increases the chances of developing a substance use disorder. That’s why rehab for seniors is so important and needs to get the same dedication that rehab for younger people does as well.

How Do Seniors Get Addicted to Drugs and Alcohol?

For the most part, seniors who find themselves suffering from addiction tend to fall into two main categories.

The first group is known as the “hardy survivor.” This person has been abusing drugs or alcohol for years and has continued doing so after turning 65. The second group is the group that doesn’t get nearly as much attention and that’s the “late-onset” group. This group consists of those who find themselves suffering from addiction for the first time in their lives after turning 65. 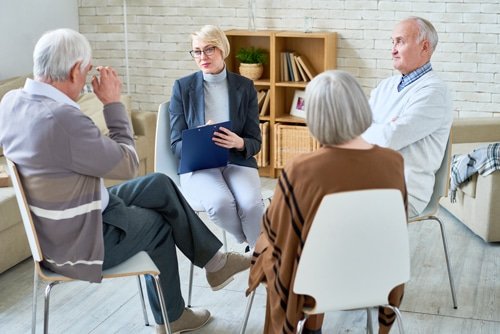 For the “late-onset” group specifically, addiction can begin for a variety of different reasons, including:

While seniors may find themselves getting hooked on various substances, the most common substances of abuse amongst those 65 and older are prescription medications and alcohol.

What Is The Significance Of Alcohol Abuse Among Seniors?

Alcohol is by far the most commonly abused substance among the senior population. Drinking is a popular coping mechanism among seniors due to all the complications that come with being older, both physical and mental. In addition, as the body gets older, it doesn’t properly break down the alcohol as easily.

Signs of Alcohol Abuse Among Seniors

Some signs of alcohol abuse among the elderly include:

The American Geriatrics Society and the National Institute for Alcohol Abuse and Alcoholism recommend that those over the age of 65 drink no more than seven standard drinks per week. Those drinking more than that are considered at-risk drinkers.

How Common is Drug Abuse Among Seniors?

While drug abuse might not be quite as common as alcohol abuse for those 65 and older, drug addiction hits seniors harder than any other age group in the country. Seniors have by far the greatest and easiest access to prescription medications due to all the ailments that arise as they age. In fact, according to the National Council on Alcoholism and Drug Dependence, 40% of all medications prescribed in the United States are prescribed to people 65 and up.

Signs of Drug Abuse Among Seniors

What are some signs of prescription drug abuse for a person age 65 and older? Any of the following could be a sign that there’s an issue:

What Are the Most Commonly Abused Pills By Seniors?

The vast majority of prescription medications that seniors are prescribed fall under two categories and, as a result, are the most common types of prescription pills that are abused by seniors. The two types are opioids and benzos.

Opioids are hands down the most commonly used and abused drug in the United States, regardless of age. However, due to the variety of ailments that seniors tend to have to deal with, and the fact that opioids are commonly prescribed to deal with these issues, opioids tend to hit this age group particularly hard. Some opioids that are commonly prescribed to those 65 and older include:

Commonly referred to as “benzos,” these medications are psychoactive in nature. They tend to be prescribed for issues such as anxiety disorders, insomnia, and cerebral palsy. Because of both their strength as well as what they do, they are easily abused, especially amongst the senior population. In fact, almost 17 million Americans 65 and older alone are prescribed some type of benzo-related sedative. Some benzos that tend to be used and abused by seniors include:

Why Can It Be Difficult To Identify Addiction in Seniors?

Since seniors tend to suffer from more ailments and issues than younger people do, it can often be difficult to properly diagnose someone 65 or older with an addiction. This is because many of the common signs and symptoms associated with addiction also mimic symptoms of many ailments that seniors already suffer from. As a result, many family members and medical professionals might see signs and symptoms of addiction and just chalk it up to declining health or simply just old age.

How Can You Identify Addiction in Seniors?

While it may be tougher to identify, there are still certain behaviors and other things to be on the lookout for to help identify an addiction issue. Some signs of drug or alcohol abuse in seniors include:

Treatment Options in Rehab for Seniors

If you read the list above and think your elderly family member might be suffering from addiction, the good news is there are options out there to get them the help that they need.

There are certain treatment centers and addiction programs out there that are tailored to those who are 65 and older. Many of these elderly programs offer a case management component as those who are older typically lack the social support needed to successfully go through treatment. These case management services provide access to medical, psychiatric, and social resources as well as aftercare programs.

Unlike other age groups and demographics, those who are 65 and older tend to react to treatment differently than the majority of others. As a result, the following programs have been proven to be the most successful for seniors suffering from addiction:

Want To Know More About Rehab For Seniors?

Regardless of one’s age, gender, creed, or color, addiction can be a scary thing to go through. The good news is, you don’t have to go through it alone. At Chapel Hill Detox, we provide a variety of detox and addiction treatment programs for people suffering from all types of addictions. It’s important to remember that it’s not too late to get help and there are people out there that want to help you live a better life.

If you or someone you know is suffering from addiction, contact us today to learn about our treatment programs. We will show you how you can live a happy, healthy, and sober life.